“The NEW Legend of the Sand Dollar” 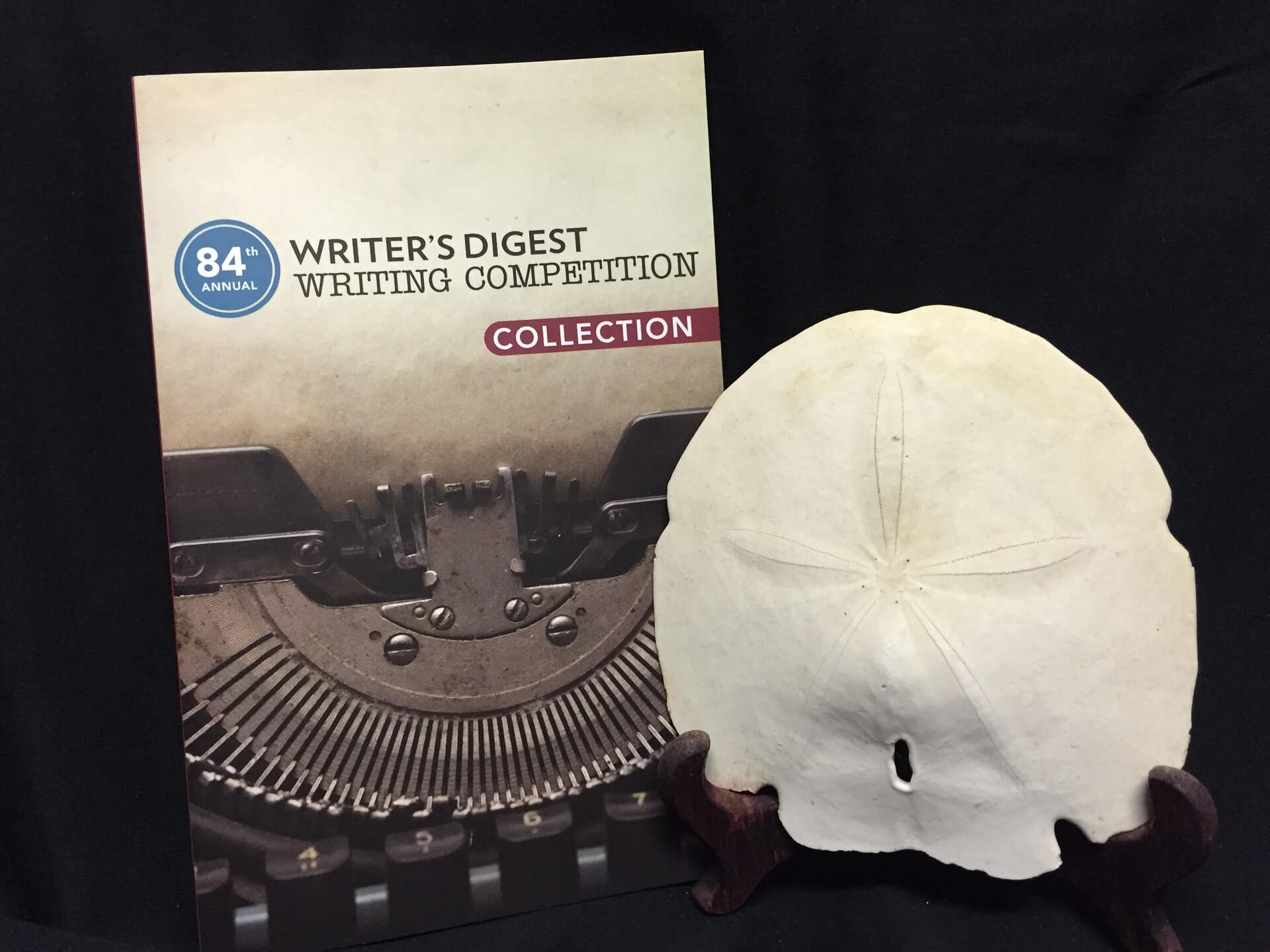 Normally, there is nothing unusual about a walk on the beach. Things are as predictable as the soothing, constant rhythm of the waves breaking and rushing over bare feet, one after the other like a gentle massage from Mother Nature, providing cherished time for undisturbed introspection. But today was destined to be different—a day I would never forget and always cherish.

It had been three years since my husband, Tom, and I had been able to get away together. In addition to demanding careers and caring for our daughters, we had spent all our spare time making grueling, round-trip visits from Florida to North Carolina to see my father and mother. During those three years, my father had fought a losing battle against cancer. Finally, he had gotten too tired to battle the insidious invader. Since we’d just returned from my father’s funeral, Tom felt a trip to the beach would be extremely cathartic and restful for me. Yet, even on this impromptu vacation, my father was still very much on my mind, his spirit comforting me in memories, but my spirit was still very unsettled.

My father and I had always been close. He gave me my love of books, writing, and community service. We often engaged in lively debates on issues close to our hearts. He was the kind of guy the Army honored with ribbons, a folded flag, and a 21-gun salute. As the paratroopers carried his casket, their shiny boots sloshed through a puddle of water, and my mind wandered remembering Dad’s stories of trudging through mud during World War II in France and Germany. He never got over the nightmares of what he saw while liberating a concentration camp. As a young soldier, he’d made a pact with God that if he made it back from the war, he’d dedicate his life to the Lord’s work, and he did just that. The only solace I had at his death was that if ever there were an angel that walked this earth, it was my father.

Since the cancer diagnosis, time had become so precious to Dad and me. We talked regularly on the phone, and on one particular evening, I boldly mentioned that a pastor friend had suggested that we “take care of any unfinished business.” We had a good, hearty laugh over that suggestion. If anything, our relationship had always been painfully honest, especially during my adolescent years. To say I had been a mental and emotional challenge for my father was an understatement. I debated him on religion, philosophy, politics, the Vietnam War, and even questioned his parenting techniques. His favorite comment was, “Young lady, one day this is going to come back to haunt you—double!” And, on this particular sun-drenched day at the beach, I was worrying about what my two precocious teenage daughters were up to at home, especially in our absence. As the Gulf winds blew my hair, I tucked it behind my ears and admitted that I had more gray hair now than Dad did when he died, so he certainly left me a legacy of divine parental justice.

Although we never said it, I know Dad and I felt prepared for the end. Yet, when he slipped into a coma before I was able to make the long trip to say my last good-byes, the truth hit hard: You can never really prepare for the loss of a loved one. Well-meaning friends in the medical profession kept telling me that even though Dad was in a coma when I reached him, he was aware of my presence. I was not convinced.

Now, on the Gulf of Mexico coast, Tom suggested I take this walk while he stayed behind to work on the boat. The place we anchored was unusually isolated, and today it appeared I had the island to myself as well. The beach is named for all the lovely shells that wash ashore, but with boat loads of tourists arriving daily up island, real shell “finds” are increasingly hard to come by, especially in the summer months.

As I started my solitary trek, I began to talk out loud to Dad telling him how much I missed him and how very sorry I was I hadn’t been able to get to him in time. The grief and guilt was more than I could bear. My despondent tears turned into gut-wrenching sobs, until I became aware of a strong presence surrounding me. It was futile to try and repair my blotched face, so I whirled around, indignant at the interruption, to confront my intruder. A very startled sea gull took immediate flight, chastising me for being the human invader to his natural environs. As I continued to walk, the feeling of not being completely alone persisted, so I decided to continue an audible dialogue to calm my nerves.

“Dad? Is this you?” Perhaps it was an angel. Yep, that would be Dad. “I feel as if you might be all around me, so you must know your death left me devastated. I need to know you are okay. God please send me a sign.”

But what kind of sign? A bolt of lightning? The audible voice of God? A burning bush? Then it came to me, a sand dollar! I had walked this same island for years and had never found a completely intact sand dollar, only pieces. Since the tourist boat had just departed, my chances were greatly diminished, but I remember what Dad always taught me, all things are possible with God.

“If my father is with you, no longer in pain and in a better place, God please send me a sand dollar.”

I stopped, closed my eyes and took a deep breath. Anxiety gripped my heart. What would I do if there were no sign? This is ludicrous and foolish, I thought. How could I, a mature adult, have made such a request? I felt like a child avoiding cracks on the sidewalk, and yet I needed God’s affirmation so much, but wasn’t my faith in God enough?

As I opened my eyes, I hadn’t taken two steps before a forceful wave surged ahead of me and delivered the cherished shell right at my feet. I picked it up and began to sob, this time with joy. “Thank you, God! Your sign is like getting that final kiss and hug I wanted from my father before he left me.”

But God wasn’t finished. Another wave brought two additional sand dollars and deposited them directly in my path. I scooped them up and dropped to the sand, staring in awesome wonder at these extraordinary gifts.

Coincidence? Some skeptics might say so. But then, there were skeptics in Biblical times as well. My personal belief is that God gives you the comfort you need in your time of grief. There are also those who say through the Holy Spirit, God sends his angels to deliver messages of love and encouragement to those who authentically believe. I was glad my father had instilled in me the desire to receive the special gift of faith and salvation. I was even more appreciative that in my time of doubt, God had graciously shown He is who He says He is and can do what He says He can do.

After Tom and I returned home from our vacation, I was recounting the event to two women in my Bible study. One said, “Do you remember the significance of the Legend of the Sand Dollar?” I admitted I didn’t, so she explained. “The sand dollar is said to be a visible reminder of the story of the birth and death of Jesus.”

As she turned one of my precious treasures over in her hand, she gestured to the significant markings. “Each sand dollar has four holes that are supposed to indicate the suffering of Jesus on the Cross from the four nails, with the fifth caused from a soldier’s spear. On one side is etched the outline of what appears to be a star, just the same as the Wise Men followed. If we were to break it open, from the center of this strange-looking shell would come five, bird-like shapes representing doves of peace waiting for release to spread the Word of God.”

“And that’s not all,” my other friend added. “You received three shells. The Bible is very specific about how significant numbers are and three represents the Trinity. Plus, it’s also the symbol of completeness and resurrection, since God has three all-embracing attributes, omniscience, omnipotence, and omnipresence.”

On this exceptional afternoon, I felt as if I’d experienced God in all His glory.
As I write this, it has been several years since my father’s death, and the strength of these gifts from the sea still bolster me in times of grief. And even though I haven’t had another occurrence of the overwhelming presence, I have never again felt totally alone and know I never will.